In each year of teaching music, I have always had at least one student who was interested in majoring in music education.  Many of them have went on to actually major in music ed, some have tried and have failed out due to the unnecessarily strenuous requirements of the overworked music education major.  One of my potential music-ed majors this past year went back and forth so many times between teaching music (what he thought he would love) and wanting to make enough money to support a family (what his family wanted) that I just about gave up on trying to figure out which decision he had made and I still am not entirely sure.  This is a very real struggle, and perhaps one of the reasons that the field of education today is still primarily female-dominated.  While this issue is not unique to music education, the overwhelming expectations of a music educator IS a unique deterrent to a family-oriented student.  The primary influence on a potential music ed major in this crucial time period of decision making is most likely the high school band/orchestra/choir/guitar teacher.  The demands of a high school music teacher are immense (marching band anyone?) and could deter even the most gifted future music teacher if they want to have any time at all outside of work.  Perhaps if colleges are in need of more music ed majors and schools in need of more music educators, they need to take a closer look at the salary/education requirement ratio compared to other majors and the massive expectations placed upon music educators regarding extra activities. 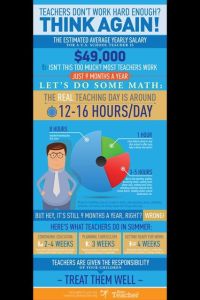 How Much is Too Much?

I once had this amazing student who wanted to become a music teacher.  She had everything you would want in a music teacher, well just about… She was patient, kind, hilarious!, a good musician, and just got kids.  I could send her into a sectional with just about anyone and they would come back into my rehearsal sounding better, more confident, and happier.  She knew exactly what to do even then and would have made an amazing music teacher.  So, she graduated from high school and went into a music ed program.  Imagine my excitement to see this student join me in my own field!  I couldn’t wait to see her in her own classroom, until I got the message that they had chewed her up and spit her back out within 5 months…  She wasn’t a “good enough violinist.” Even though she passed the audition and was more than good enough to teach just about anywhere in her own state.  Her music theory skills weren’t up to par and she just wasn’t going to make it.  After these experiences, she decided to quit music and never go back.  Our loss.  A major loss.

Every time my student considered being a music ed major, he returned to wanting to support a family eventually.  He was acutely aware of the fact that most teachers are married to someone wealthier than them.  Most teachers complained about their salaries.  And most teachers couldn’t afford to live in the communities that they teach.  This student would ask me, “how do you afford to live up here in a house?” And I would hate to say it, but it was only because my husband made twice as much as me.  Another younger male student commented on men still being expected to make more than women and to take care of the family.  And we wonder why we have so few men in our field?  Perhaps if we paid teachers more… But we all know this, and is it really going to change?

Even majoring in music education requires an increased time commitment.  Did you know that many music ed programs are actually 5 years?  For a BME… I remember having to take twice as many classes as my college boyfriend, a business major, who would be sure to make double my salary right out of college.  And yet, we were required to take like, 6 music theory classes, 4 music history classes, in addition to our general and music education classes, our private lessons, our ensemble credits (0 credit hours) AND many expected us to keep the same performance standards as performance majors.  Oh, and this often includes ZERO courses on classroom management (perhaps the most important class for any music teacher)…  These expectations and requirements are a huge attrition factor and an even bigger deterrent for any student who does his/her research before starting a music ed degree.

I’m not saying not to major in music ed, because obviously I love music education like it’s my own child, but I think we need to really rethink our own degree requirements and performance expectations.  Okay, ranting over for now… Thanks for listening and think on this!

P.S. – This was the article that put me on this rant.  You can blame edutopia for this one 😉